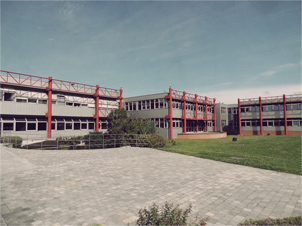 The GI (Groupement Informatique) is established in 1986 as an ICT entity shared by OMOB (presently Ethias) and three Liege utility companies: CILE, ALG and ALE, the latter two of which are currently part of the Nethys group.

The same four shareholders, joined by CCB (Crédit Communal de Belgique), Coditel and Electrabel, found the limited liability company NRB in 1987. Its aim is to reduce increasing ICT costs and use the competencies of the employees of the new company. This means that NRB initially only provides services to its own shareholders.

Created in 1989, the GIEI (Groupement d’Intérêt Economique et Informatique) entrusts NRB with the management of the ICT resources of the French Community of Belgium and the Walloon Region (presently the Walloon-Brussels Region). NRB modernises and secures its installations from 1995 onwards and expands them significantly in 1995.

The group expands its range of services to parastatal and private institutions in 2005.

New buildings are added in Herstal in 2007, and a third data centre is inaugurated in 2010. In the same year, NRB buys the 51% shares Dexia (presently Belfius) holds in the ADINFO holding. This holding company includes three ICT companies that are active in the local public sector: Cevi in Ghent, Adehis in Namur and Logins in Mechelen.

In 2011, NRB installs a new disaster recovery centre through its partnership with the Wallonia Data Center (WDC), which is situated in Villers-le-Bouillet. This enables NRB to offer its customers a complete architecture with data centres located more than 30 km apart.

In the same year, Xperthis, the new market leader in ICT services for the Belgian healthcare industry, is established by NRB, Polymedis (Mons), Partezis (Heverlee) and Xtenso (Mechelen). The NRB group owns 55% of the shares. 2011 is also the year in which NRB becomes the first and only certified SAP Hosting Partner in Belgium, which means it can provide on-demand services to SAP environments.

Stesud, a company that specialises in solutions for the local public sector, joins the NRB Group in 2013. The company is acquired by Adinfo and subsequently merges with Adehis to become Civadis. At the same time, NRB fulfils its role as an economic engine by investing in the start up Afelio. Based in Liege, this company designs and develops mobile and web applications.

In 2014 and 2015, the NRB Group continues to grow by acquiring Ciges and Mims, two companies offering ICT solutions for the healthcare industry. Combined with Xperthis, these two entities constitute the "Xperthis Group", the market leader in ICT solutions for the healthcare industry. 2015 is also the year in which NRB buys 100% of the shares of the capital stock of the Trasys Group.

The operations of Trasys are fully integrated into NRB in 2016.

In December 2016, NRB decides to sell its print shop operations to the IPEX Group, a specialised company with printing as its core business.

On the 1st of January 2017, Trasys nv, Trasys Group nv and Trasys Technology nv cease to exist from a legal point of view as they are merged and absorbed into NRB nv. Trasys Luxemburg PSF remains unchanged and becomes an affiliate of NRB nv.

On the 2nd of January 2018, BelgiumDC, the new NRB data center in Villers-le-Bouillet goes operational. This data center is the result of a joint venture between NRB SA and the ETIX group. The latter is a specialist in the construction and operation of ICT infrastructures around the world.

On January 29, 2018, NRB signes a major agreement with IBM to offer its customers the most advanced technologies for highly automated and intelligent hybrid cloud services. This smart self-service platform will act as a cloud services broker advising the customer on the best approach to manage and process their data - be it on premisse, in NRB's private cloud, in the public cloud or a combination. The platform will connect to the public IBM cloud, Microsoft Azure and AWS. The connection to Google cloud is planned.

In June 2018, Cevi and Logins, both NRB Group afiliates, each acquire 50% of Siggis, a company active in the GIS (geographic information systems) sector.

At the beginning of July 2018, NRB announces the acquisition of s.p.r.l. UCON, an SAP services company dedicated to the utilities sector. This targeted acquisition is perfectly in line with NRB's strategy to strengthen the group's SAP strike force, thus complementing its SAP offering and capabilities, mainly in the field of SAP IS-U and FI-CA.

In 2020, the NRB Group made several targeted acquisitions:

More info about our entities here

RTBF (the Radio & Television Broadcasting Company of the French Community of Belgium) has its financial processes perfectly under control thanks to the Neopro project with SAP and NRB
CIO Cécile Gonfroid supervises RTFB’s digital transformation with the Direction Générale Technologies et Exploitation (DGTE) department, which runs...